Rocklands – We have a problem

Bouldering belongs to the genus climbing, and Rocklands in the Cederberg is a mecca for the sport

ROCKLANDS – WE HAVE A PROBLEM

We arrive early at the De Pakhuys campsite bar to try to get a sense of how the bouldering gang warms up to a long-weekend Saturday night. Fleece and head torch-wearing climbers troop slowly into the venue, and we connect with a cosmopolitan group of friendly youngsters who have come to the Cederberg to boulder.

Broadly, climbing can be divided into trad-climbing (as in, “traditional”), sport-climbing and bouldering. Trad and sport are more dangerous than bouldering, mainly because the action takes place further from terra firma, but a boulderer might claim that his or her sport is the purest form due to the relative lack of kit needed to shimmy up a rock. All you need to boulder is a pair of climbing shoes, some chalk and a bouldering mat, which is placed in the potential impact zone on the ground beneath the boulder.

A “PROBLEM”, IN BOULDERING PARLANCE, REFERS TO THE WAY A CLIMBER WILL ASCEND A PARTICULAR ROCKFACE

Bouldering involves an especially concentrated approach to climbing a small vertical (or inverted) section of rock. In contrast to bouldering’s more elevated relatives, where the decisions are spread out, bouldering places more immediate stress on the body and has fewer (but more demanding) moves. Seldom will the boulderer be more than six metres off the deck.

It’s also seen a spectacular rise in the last decade, mainly as a result of an increase in the number of indoor climbing gyms – hangar-sized spaces housing huge swathes of artificial rock faces dotted with brightly coloured holds.This trend has made climbing accessible to large numbers of urbanites, and climbing gyms offer an indoor alternative to traditional gym life. 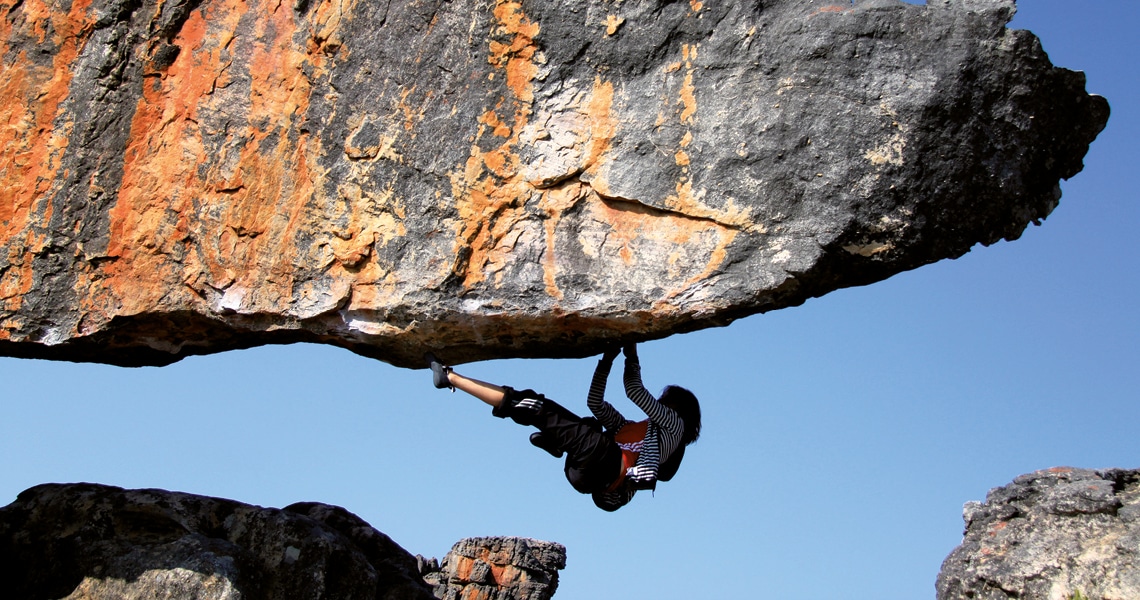 A lot of the talk in the bar revolves around bouldering “problems”. A “problem”, in bouldering parlance, refers to the way a climber will ascend a particular rockface. The solution to the problem will describe the sequence of moves, the type of holds (crimp holds, pockets, jugs, kids, slopers, footholds, pinches, rails, roof jugs, volumes or loaves) available, and the particular combination of the two. Each climber will have his or her own permutation, which will depend on core strength, length of limb, general ability and finger strength.

The next morning, groggy climbers emerge from their tents, and a stream of cars snakes up the Pakhuis Pass to Rocklands. Rugged and exquisite with its great folds of sedimentary rock emerging from the ground, Rocklands isn’t just a mecca for Western Cape boulderers: it has been recognised as one of the top three climbing sites in the world.

But beyond that fact, it’s obvious why this is such a popular activity. Given the relatively low setup costs, its relatively safe nature, and the warmth of the community that supports it, bouldering isn’t merely an excellent entry into the sport of climbing – it’s a challenging form of outdoor exercise in its own right.

TRAD AND SPORT ARE MORE DANGEROUS THAN BOULDERING, MAINLY BECAUSE THE ACTION TAKES PLACE FURTHER FROM TERRA FIRMA

From Cape Town, take the N1 towards Paarl, then the N7 turn-off towards Malmesbury. After about 200km, take the R364 turn-off towards Clanwilliam and turn right at the T-junction. Continue through the town and up the Pakhuis Pass, along a dirt road, for about 16km. You’ll hit tar again near the top of the pass. A small dirt road to the right will take you to the parking for the Rocklands bouldering sites. De Pakhuys campsite is about 8km further down the pass. depakhuys.com 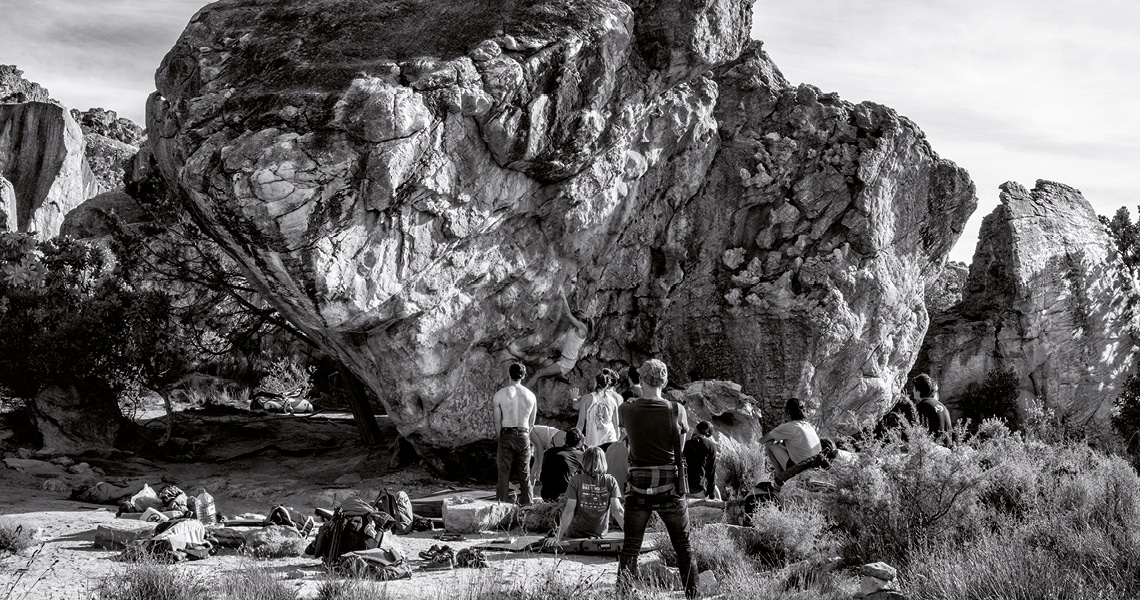 As the Cederberg mountains are part of Cape Nature-managed lands and situated on private properties, you will need a permit. You can purchase one at the De Pakhuys office or campsite, or online via quicket.co.za (search “Rocklands bouldering permit”). Individual permits cost R80/day, R130/weekend or R260/week.