HOW THE NEW LAND CRUISER GOT ITS DRIVE: PART 2

The Land Cruiser has a long history. “It turns 70 this year, and the model name has been around longer than any other at Toyota,” says Kazuyuki Ueno, a test driver whose involvement with the vehicle dates back more than 20 years to the 100 Series. “I personally drive a Land Cruiser. The car is loved by customers around the world, and I think the way it has connected with people, those intangible assets, is a key part of the vehicle.” 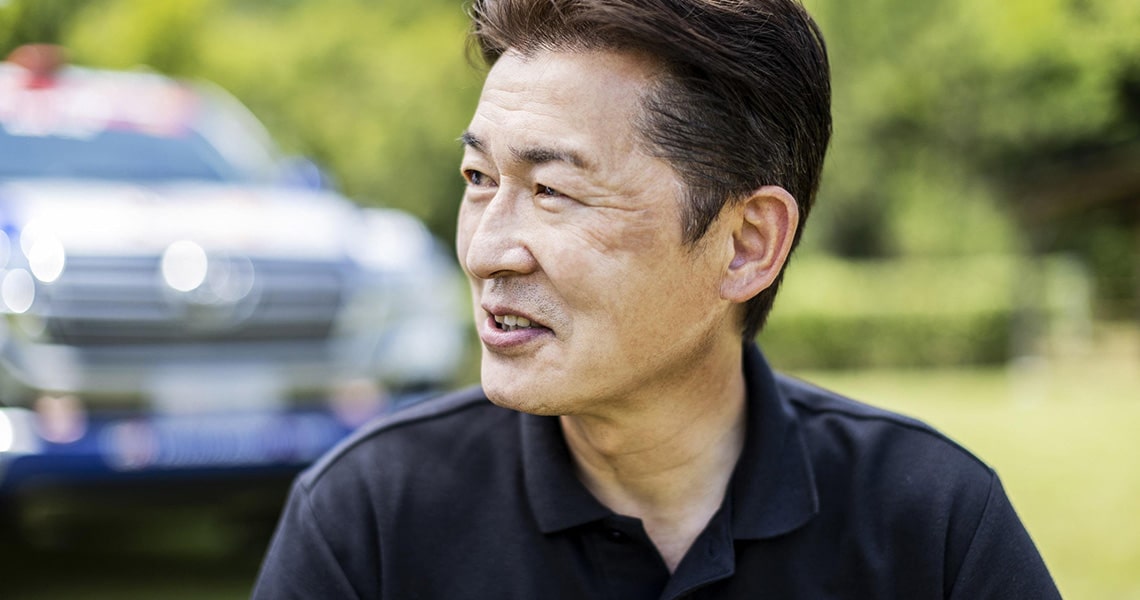 Akihiro Osaka of the Advanced Technical Skills Institute Division handled on-road evaluation of the Land Cruiser. “My role was to bring something extra to the Land Cruiser’s core of reliability, durability and drivability on rough terrain – to achieve even greater comfort and ease of use.” 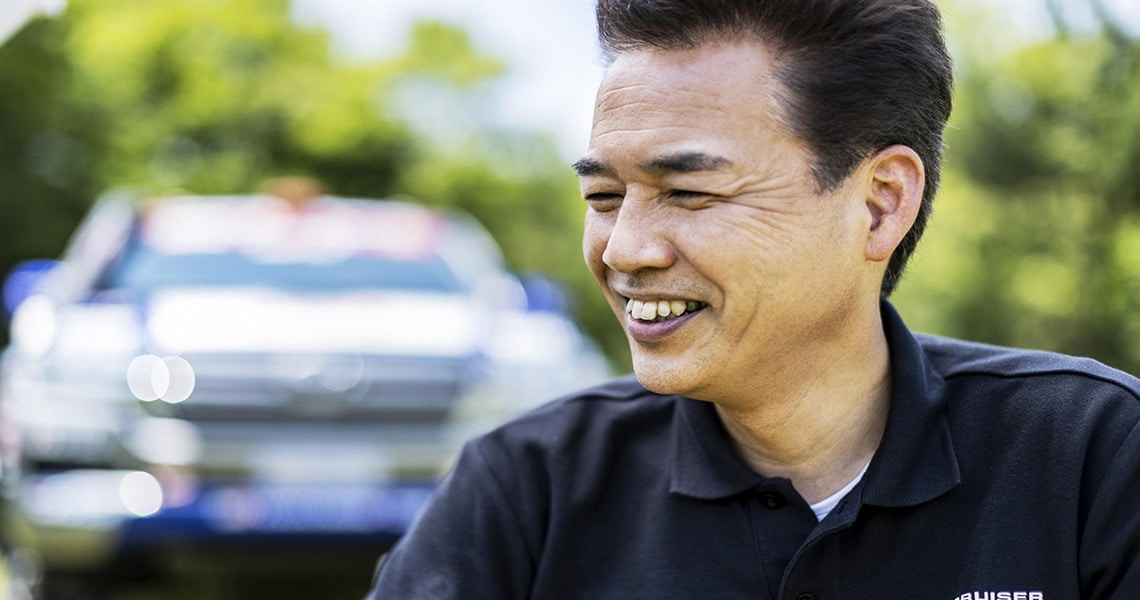 Akira Miura, on the other hand, had driven the Land Cruiser in the motorsports arena – namely the Dakar Rally. “I love motorsports, but to begin with I was not a professional driver,” admits Miura. “This car has enabled people like me to tackle the gruelling Dakar race, to the point where we can now post competitive times. I can tell you from personal experience that this car makes the impossible possible.” 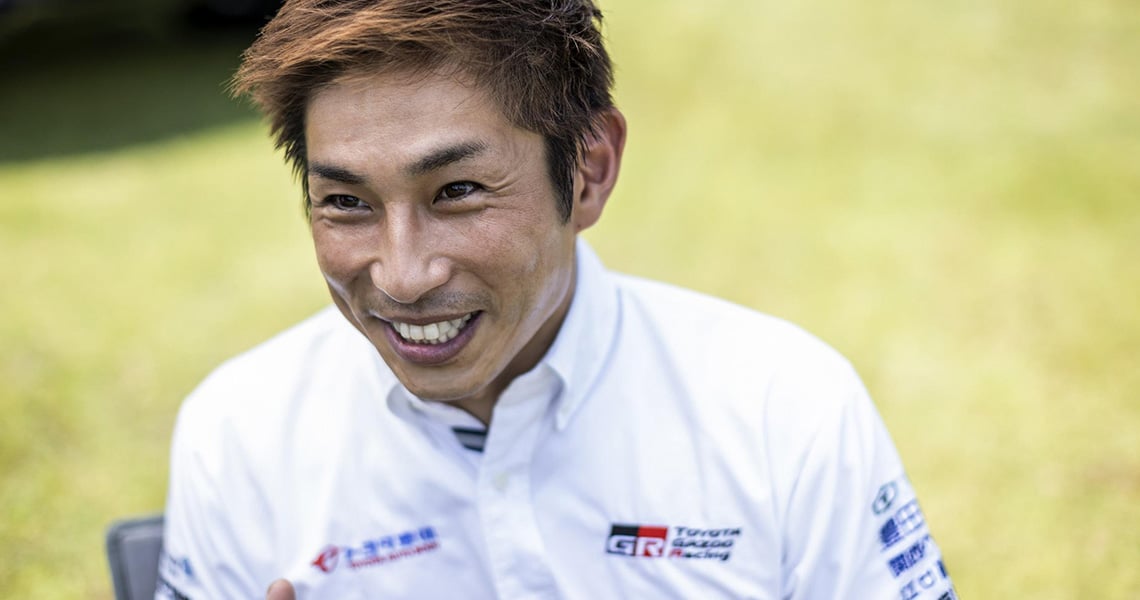 In the early stages of development, chief engineer Takami Yokoo consulted Miura to work out the basic design, starting with the base grade. The creation of the GR Sport grade came later. 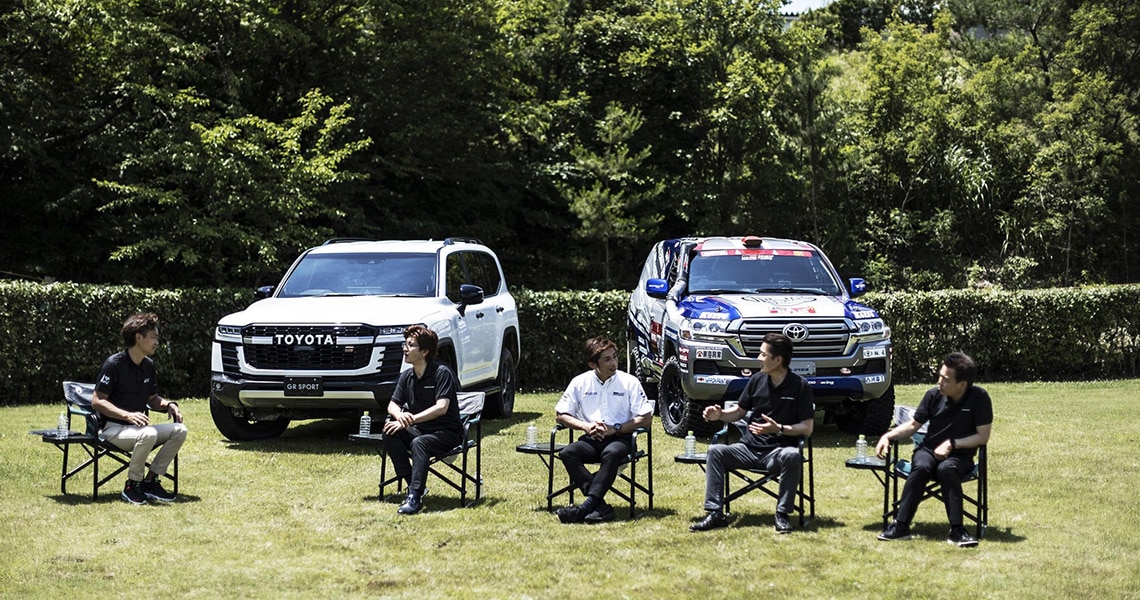 Even Wakisaka could not hide his surprise at the striking difference in driving between the 200 Series and 300 Series, after taking both Land Cruisers through the Sanage Adventure Field’s off-road course. 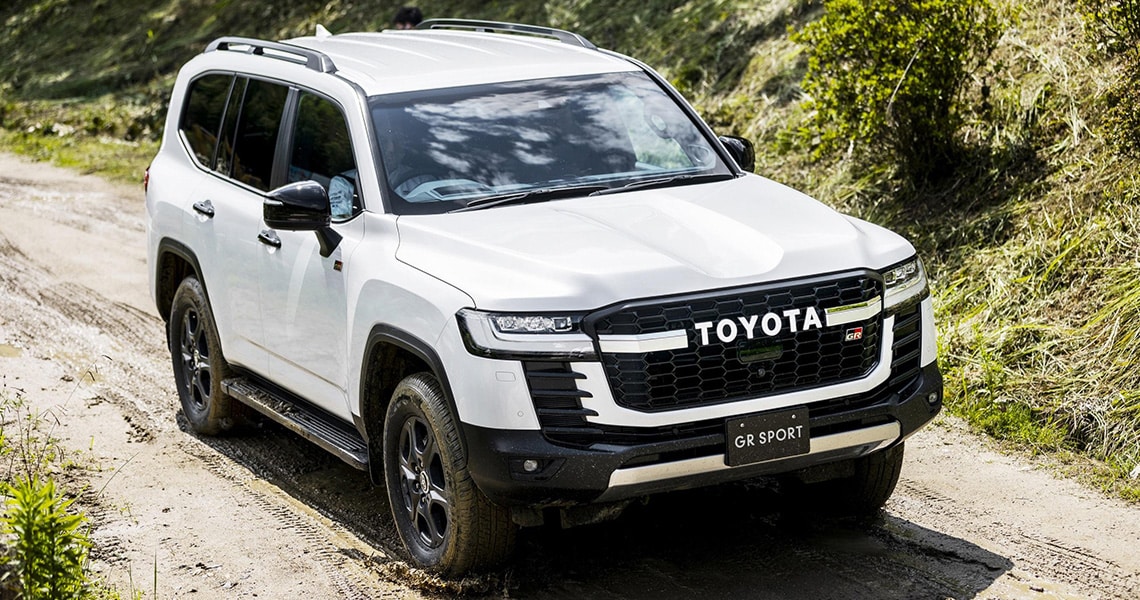 “When you take such a large car off-road, you have to expect some serious shaking,” explains Miura. “This jolts the body as well, so the driver has to brace themselves with their arms and legs. Inside the 300 Series, however, even off-road the shaking was so gentle that it almost felt like an anticlimax. On top of that, the driving position is also more natural than in the 200 Series, so it feels like driving a sports car. When driving off-road, you can operate the car naturally in constantly changing environments and surface conditions.

In that sense, I found it easy to drive. It made me realise that, until now, I had unconsciously written off this aspect as an inevitable part of designing the Land Cruiser for durability and performance on rough terrains.”

There’s a good mismatch between the view through the front window and the movement of the vehicle. From inside the car, even big gaps feel like you’re clearing tiny potholes. But when you see it from the outside, the suspension is at full stroke to maintain contact with the road. The 300 Series also has more power steering assist, which makes the steering lighter, but manages to retain feedback from the road and a natural feel when driving. It achieves a high-level balance between seemingly conflicting requirements. 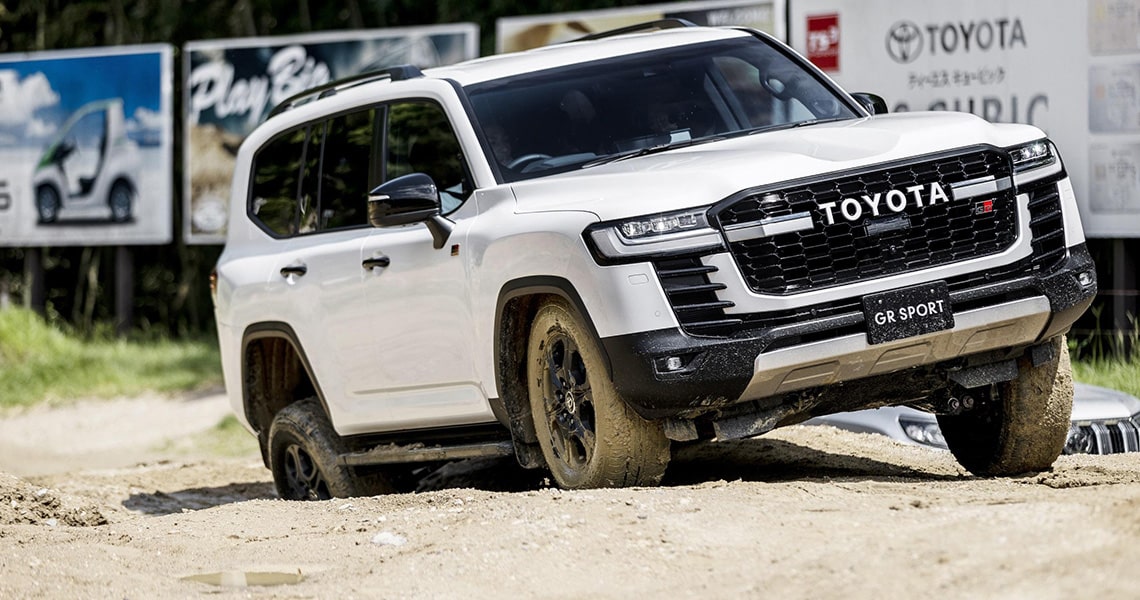 “Many factors contribute to this,” says Yokoo, “but in my mind the biggest was the fact that, for the first time, we were able to establish a new TNGA (Toyota New Global Architecture) platform for a ladder-frame vehicle. We started with a driving position that allows easy operation in a natural posture, then lowered the centre of gravity as much as possible to ensure the vehicle body moves smoothly. In past models, the shock absorbers were slightly out of alignment with tyre movement when stroking, and we were able to optimise this for the 300 Series by bending the frame a little. Revamping the frame made many things possible.”

Osaka explains that since the introduction of TNGA, C&N (Confident and Natural) has been a key concept in vehicle production. “In other words, the driver should naturally be able to feel safe and worry-free.

“Morizo sees this idea as the unwavering core of our development. I think this concept overlays neatly with the reliability that has been passed down through the many generations of Land Cruiser.”

“The ease of driving marks the greatest advance from the 200 Series to the 300 Series,” adds Ueno, who refined the car’s off-road feel. “As with past models, we’ve tried to make the car as long-lasting as possible. But this time, I think the added C&N perspective brought by Osaka’s team allowed us to reach the point where it’s obvious from the moment you get behind the wheel. On top of that, with new technology we’ve been able to accomplish things that were previously beyond us, such as the steering actuator and the mounting position of the rear suspension on the ladder frame.”

This common thread seems to run through both Toyota Gazoo Racing’s practice of utilising feedback from motorsports, including the Nürburgring 24-hour race, and the Land Cruiser’s development approach, which involves listening to customers. 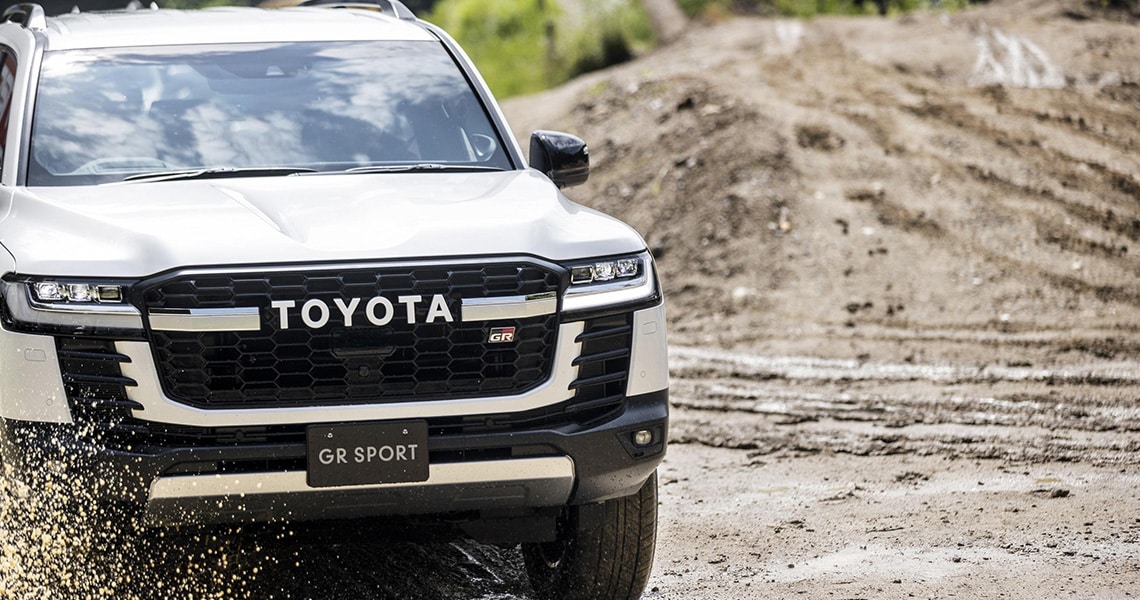 “We have always sought to create better cars by listening to the voices of customers and reflecting on breakdown conditions that we were unable to anticipate,” says Ueno. “In the case of the Land Cruiser, we learn from the customer, but just like the Nürburgring 24-hour race, our cars are forged in harsh environments, and those experiences live on in the way our cars drive.”

While Osaka hasn’t driven in extreme conditions such as the Nürburgring with the Land Cruiser, he has worked with the development team to gain what information they can from the car.

“In past Land Cruisers, on-road movement had been toned down, which has its upsides, but also requires the driver to anticipate and control the car’s behaviour,” he explains. “For the 300 Series, we used new actuator technology to lighten the steering, while the GR Sport features e-KDSS, an electronic control stabiliser that stops rolling on-road and lets the car really stretch its legs when off-road. We also worked to ensure that the vehicle’s movements do not lag behind the driver’s actions, and I believe this has resulted in a car that feels very natural to control.” 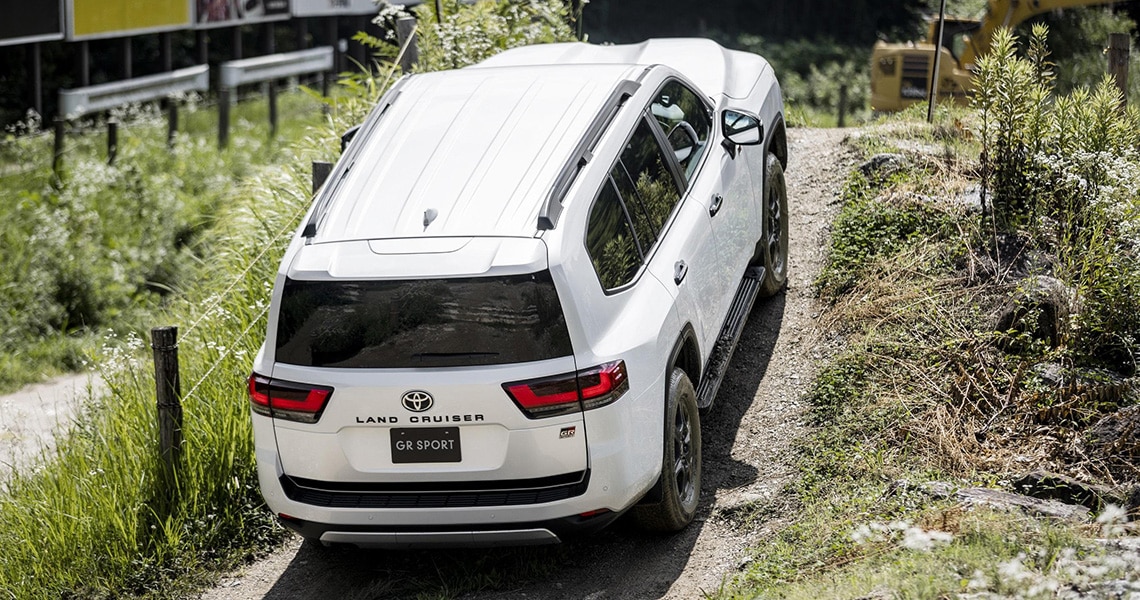 “Roads train people and people make cars” is the development philosophy passed down through successive Land Cruiser development teams. Thanks to Toyota Gazoo Racing and other motorsports activities, that philosophy has since been adopted across all development areas at Toyota. A key component is the presence of test drivers who push the cars until they break.

Yokoo views test drivers like Osaka and Ueno as teachers. “I first met Osaka while designing the drivetrain for the Lexus RC F. When I asked him to test the system I had made, I was very impressed with his ideas about the behaviour of the car and the car itself. After that, I was approached by (Sadayoshi) Koyari, who is still chief engineer for the Land Cruiser Prado and 70 Series, and moved to the development team, where I met Ueno. As it turned out, I didn’t know anything about off-road driving. Things like not putting your fingers inside the steering wheel (to avoid being injured by the reaction force) or taking your foot off the brake when going downhill. Ueno was the person who taught me that the Land Cruiser is a car that must tackle the harshest roads to sustain the lives of our customers.”

As Ueno says, everyone on the Land Cruiser development team has a really strong vision, so it’s rare for the overall vision to stray in the wrong direction. The relationship between development managers and test drivers is not about whose word is higher in the chain of command. In an environment where the genchi genbutsu principle is thriving, the goal is clear to see. 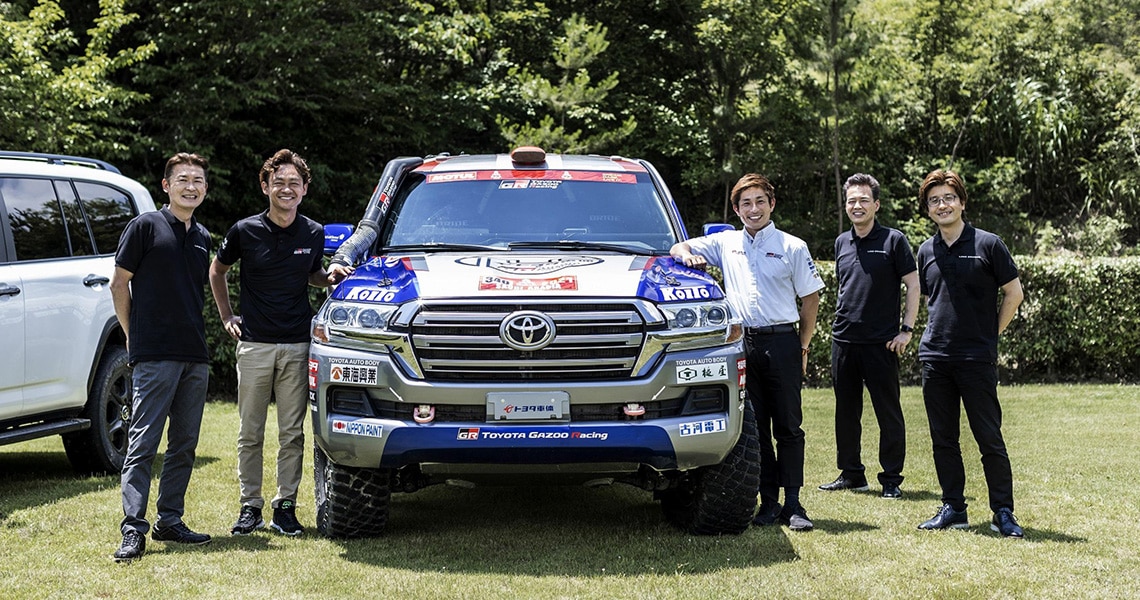 The Toyota Standard is a quality standard that all Toyota vehicles must meet, but the Land Cruiser also has its own additional standards.

“There are Land Cruiser standards that are separate from the TS (Toyota Standard),” says Ueno. “Land Cruisers have always been honed by our customers around the world. While we seek to develop the best possible car for each new model, we also receive a great deal of feedback from customers once it is in their hands. To further exceed their expectations, the Land Cruiser standards were developed on top of TS. We ensure that our development meets those standards, in terms of durability and reliability. Even so, because our customers use the cars in such diverse ways, we remain constantly tuned in to their feedback.”

Each new model must outperform the previous in those three areas: reliability, durability and drivability on rough terrain. “When developing the 200 Series, I challenged myself to make the front differential case aluminium,” says Yokoo. “The goal was to reduce weight, but this sparked a big debate within the development team on whether we really should be using aluminium. To answer that question, we spent some two years conducting tests to break the differential. If we saw a boulder, we would run the test car into it. We wanted something that could withstand such punishment. That’s what it took to get the job done.”

The word ‘break’ comes up frequently in Land Cruiser development.

“They don’t have to tell me, I’ll break it anyway,” laughs Ueno. “This approach has been taken up by each new generation of test drivers. Environments that are completely unexpected in Japan may be normal elsewhere in the world. For the Land Cruiser, we try to account for such unexpected environments in our testing. I think Yokoo also wants to see us break everything. In testing, we don’t hesitate to point out something that’s wrong. I think this system works because we share a mutual understanding in that respect.”

“As you can imagine, with a full model change and weight reduction, we need to break the car to ensure that it is safe in collisions,” explains Yokoo. “In recent years, especially in motorsports with the GR Yaris, the development approach has focused on that cycle of breaking and fixing. With the Land Cruiser, we have to break everything to move forward. I feel that both the Land Cruiser and the GR Yaris link back to the same place.”

How far is the Land Cruiser from the Dakar?

Miura says the plan is to put it in the Dakar Rally in 2023. “We have already started developing it as a rally car – right now, we are pulling the car apart, rebuilding the body and chassis to conform with the rules, and programming the engine for rally driving. We might be ready for shakedown as early as this fall, and I’m sure it will show us something new that we haven’t seen in the 200 Series.”

Even in motorsports, the Land Cruiser 300 Series will continue to open new horizons.