Lying on a sun-soaked boulder with a cold drink in hand, watching the full moon rise over the eastern mountains and the sky cast a pink glow over the kokerboom “forest”, our final evening in the Richtersveld heralded just one more surprise of our incredible adventure – a huge dust storm that descended and enveloped us all in an eerie light and a fine layer of desert dust. With not much water to go round at this remote inland campsite, it was time to fully embrace desert life and head to bed with a body full of sand and a head full of memories. 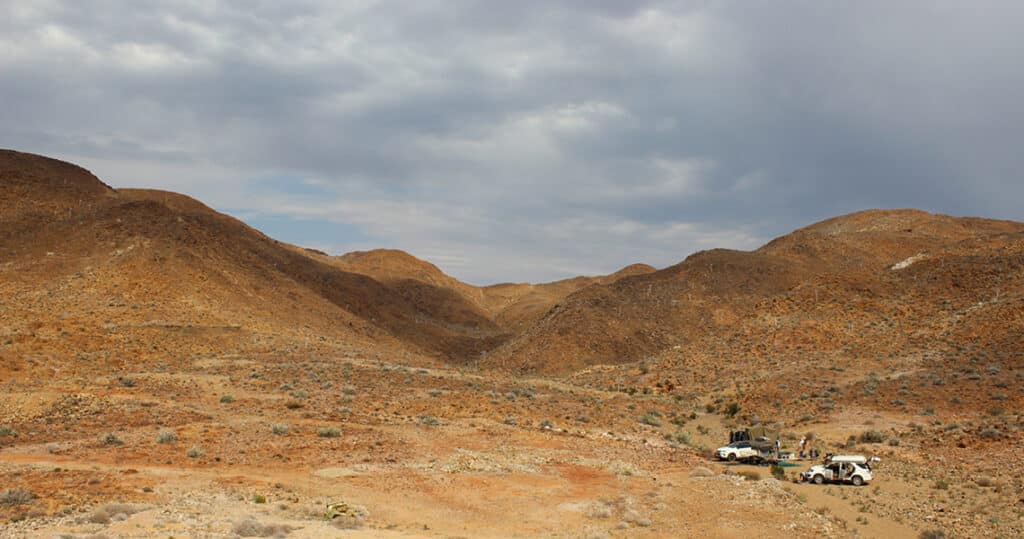 After a tumultuous year, the call of the wild was loud. Our destination? One of the oldest deserts in the world. The Richtersveld is known for its rugged landscapes and harsh climate, but it’s a place where pioneering adventurers, curious travellers and intrepid explorers often wander.

To recover from the first 700km of our journey from Cape Town, we spent two nights at the Growcery Camp on the banks of the Orange River – an emerald jewel in the almost-lunar surrounding landscape. Then it was time to head off towards the desert frontier, winding our way through the mountains of the Nababiep valley, where we marvelled at the layers of history recorded in its geological wonders. In this barren, baked place it was incredible to discover that life continues: white butterflies drifted past our windows, black scorpions scuttled over the road, and a ground squirrel sought shelter beneath a large rock. Despite first impressions, signs of life are everywhere if you seek them out.

Forty kilometres later, we arrived in the town of Eksteenfontein in the heart of the Richtersveld Community Conservancy, where the traditional way of life of the Khoikhoi (of whom the Nama are the largest surviving clan) who once occupied the entire southwestern part of Africa still survives. More than a decade ago, this vast southern neighbour to the Richtersveld National Park was returned to the Nama people. It is intended for research and tourism while they continue their traditional lifestyle, migrating seasonally with their livestock and making use of the fragile succulent ecosystem.

Named a UNESCO World Heritage Site in 2007, the conservancy area is not subject to diamond mining and is the more pristine of the two areas. It offers some of southern Africa’s most untouched hiking, 4×4 driving and camping opportunities. 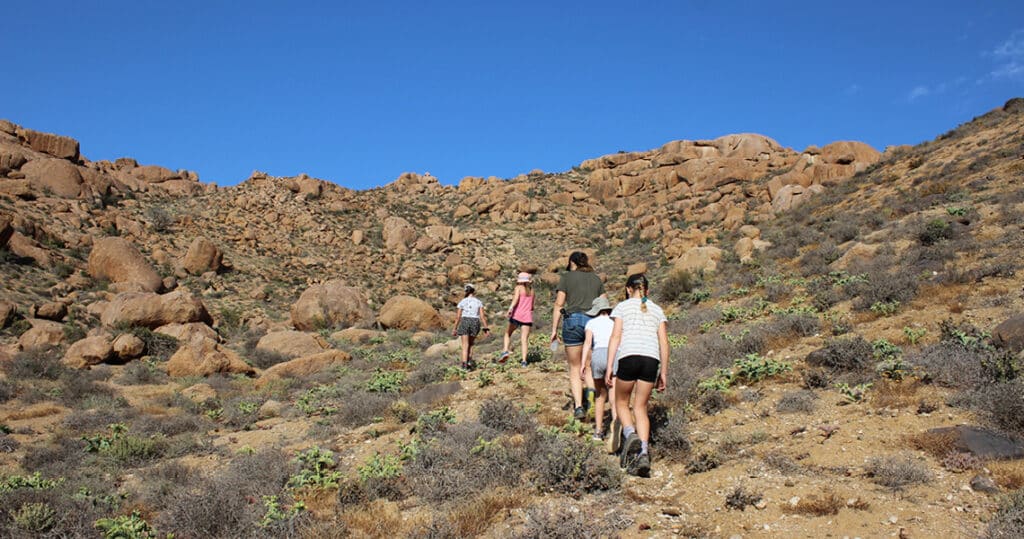 Here, in the Fluorspar Valley, we slept beneath the stars in a dry riverbed surrounded by silence and hills scattered with kokerboom.

On the drive to our second bush camp, Tierhoek, we were amazed at the changes in terrain from one valley to another. The flat plain was filled with alien-looking vegetation and delicate desert flowers. This was a great place to stare at the infinite starry night sky, imaging the many generations of nomadic people who had lived in this exact place. At dawn, before the blazing heat of the day descended, we hiked to the top of the mountain, scrambling up through the crags and cracks of the rocks to enjoy panoramic views over the vast, sandy plain. 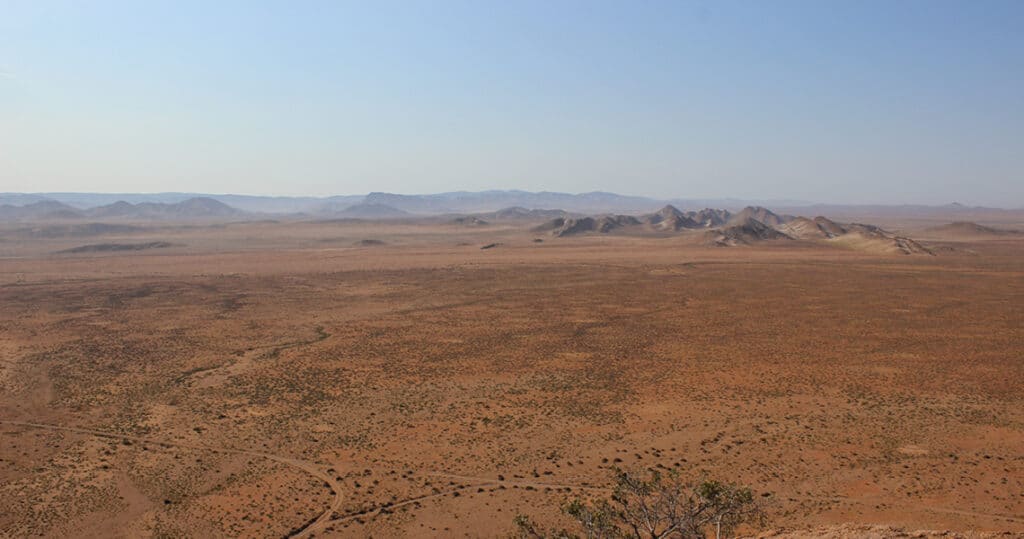 From there we headed towards the Richtersveld National Park gate and on towards Sendelingsdrift – a small mining community on the Orange River, and home to the SANParks reception area. We managed to pay a quick visit to the incredible succulent nursery headed up by SANParks’ Pieter van Zyl, an expert in the area who has discovered 23 species of plants.

The next stage of our drive, from Sendelingsdrift to Richtersberg via De Hoop, was certainly the most demanding. Despite the technical challenges we faced as novice 4x4ers, we thoroughly enjoyed the two mountain passes, the sandy riverbed and the final stretch of razor-sharp rocks, because they allowed us to test out the capabilities of our Fortuner Epic. With its 2.8ℓ engine, this 4×4 handled the road with ease – and shifting from Eco mode to Power mode ensured that the vehicle became more responsive when the rough terrain demanded extra power, yet delivered a very efficient 8.5ℓ/100km when it came to overall fuel consumption. 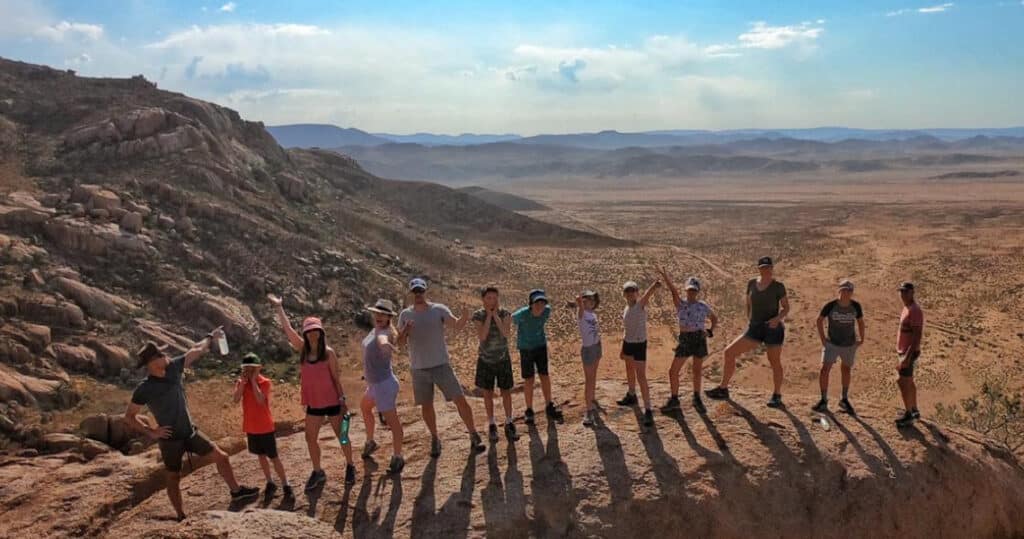 Finally, we arrived at an Orange River oasis, Richtersberg campsite, which offered grassy banks and views across to Namibia. The lush contrast that the river brought to the arid surroundings made our stay incredibly memorable. The cool, deep water of the river provided endless entertainment for the children (including swimming, inflatable boat races and fishing), so that the adults were able to spend more time reading in the hammock, snoozing in the
shade and appreciating the abundant birdlife – pied kingfishers hovering over a potential catch, masked weavers making nests and fish eagles calling to claim their territory.

Early mornings were quiet and slow. Shadows shifted across the volcanic mountains and the river, receding as the temperatures rose to their full mid-afternoon intensity. To escape the heat, we took air-conditioned exploratory drives from the camp to discover desert secrets, such as the hidden valley that leads to the Tatasberg viewpoint. Here, layers of lava rocks lie alongside massive boulders and shimmering sandstone cliffs. Outside the car, we escaped the scorchingly hot air by sheltering under the perfect “shepherds tree”. It was a great spot to soak in the silence and seclusion of this copper-tinged valley with views across the infinite gorges and mountains of the vast Namib. 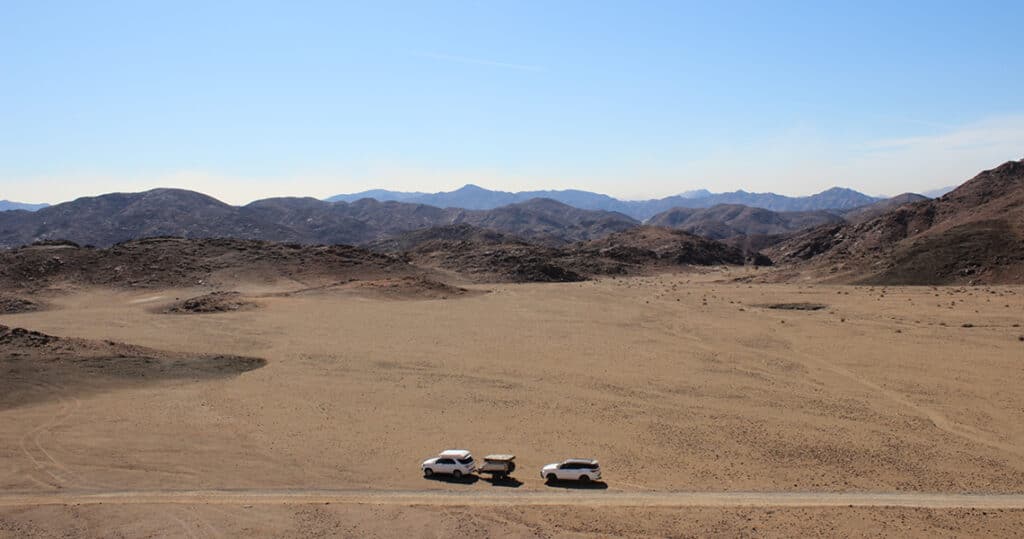 We wound our way upwards and inland through kloofs of burnt black rocks and stark baked earth, the landscape ever evolving to reveal more raw beauty. The final night of our epic escape was spent at Kokerboomkloof – a surreal spot, where the silence is astounding and the plant life fascinating. Favoured by photographers for the kokerboom “forest” and some of the best rock formations in the Richtersveld, the light here is particularly beautiful, and we were lucky to watch a full moon rise behind the boulders and experience a desert dust storm that descended at dusk as the colours of the day dissolved.

Packing up camp early on our final morning for the epic 14-hour drive home into the shimmering horizon, we realised something we’d been warned about. It seemed a certain thirst had set in – for the untamed and the unpredictable. The journey to these places may be long and the destination may be dusty, but the reward will always be great.

It was a privilege to traverse these little-explored roads and to visit the wild, pure places that few people get to experience. 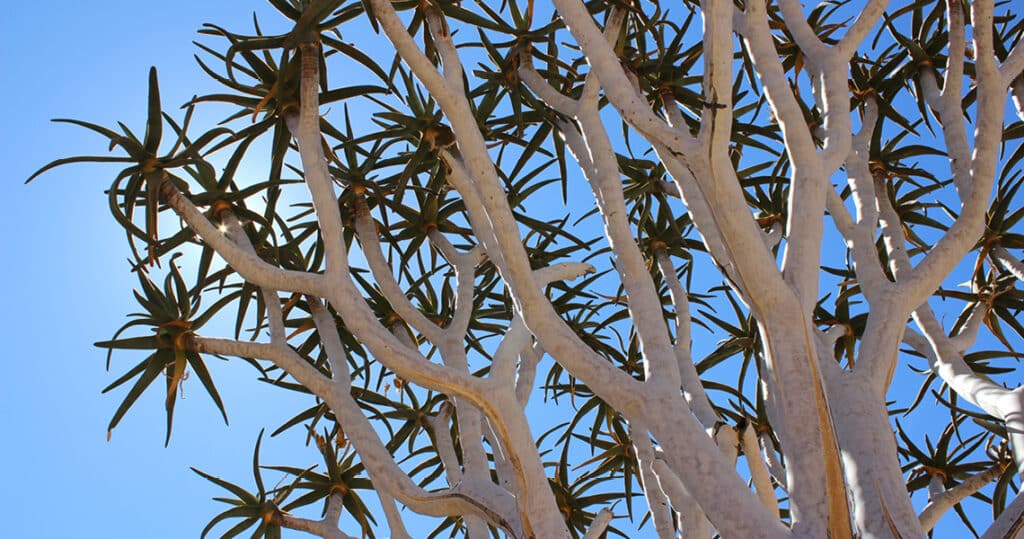 The Hand of God Locals believe God pressed his palm into a schist rock face, leaving a handprint on the mountain.

Petroglyph engravings of the San people These can be found in several places in the Richtersveld, including the Nababiep valley – and some are as old as 10  000 years. They are geometric in design, and incorporate dots, spirals and grids. It is thought that the San people chipped out these engravings on the black dolomite rocks in the first stage of Shamanism – a trance-like state brought about through dance.

The Richtersveld is one of the world’s richest reservoirs of plant life, and a treasure-trove of desert flora. A staggering assortment of plants (approximately 4  849 species, some of which occur nowhere else on Earth), is found here – mainly succulents and aloes. The Nama people revere the human-like “halfmens” trees as the embodiment of their ancestors, mourning their ancient Namibian home from which they were chased south in the late 18th century by the Germans. 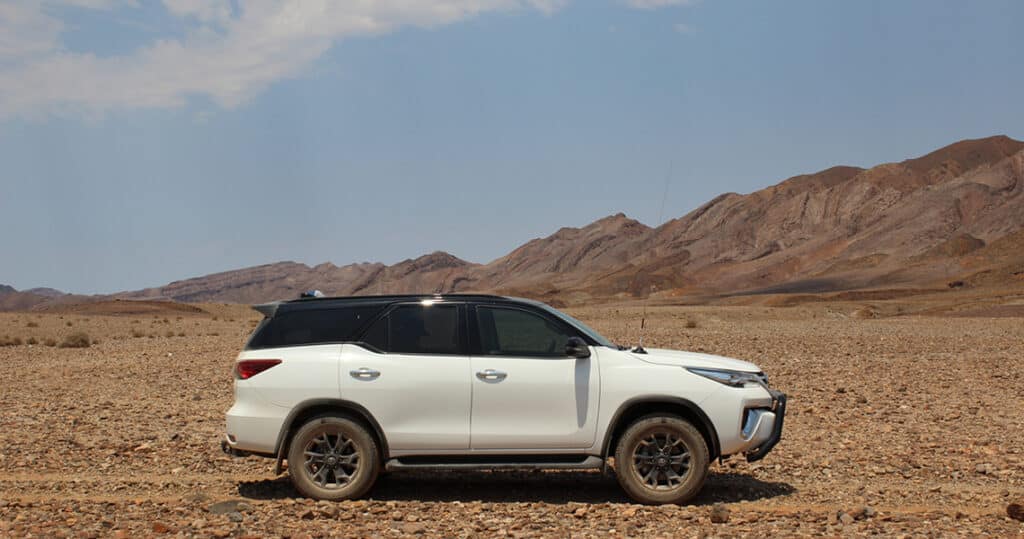 A 4×4 is essential in the park, and driving in convoy is recommended. Don’t miss the incredible Helskloof mountain pass, a 78km route out of the park from Kokerboomkloof to the main exit gate (approximately four hours); the mountain pass between Eksteenfontein and Vioolsdrift through the Nababiep reserve; the winding drive up to the Tatasberg viewpoint to see the incredible, intrusive igneous rock formations that are about 500-million years old; and the route between De Hoop and Richtersberg, which is challenging for even experienced 4×4 drivers due to the deep sand and sharp rocks.

Camping accommodation is offered at a variety of rustic campsites in the reserve. Potjiespram, De Hoop Camping Site and Richtersberg are all located on the banks of the Orange River. Kokerboomkloof is the best of the “inland” campsites in the park, although there is no fresh water – so take your own for drinking, cooking and ablutions. 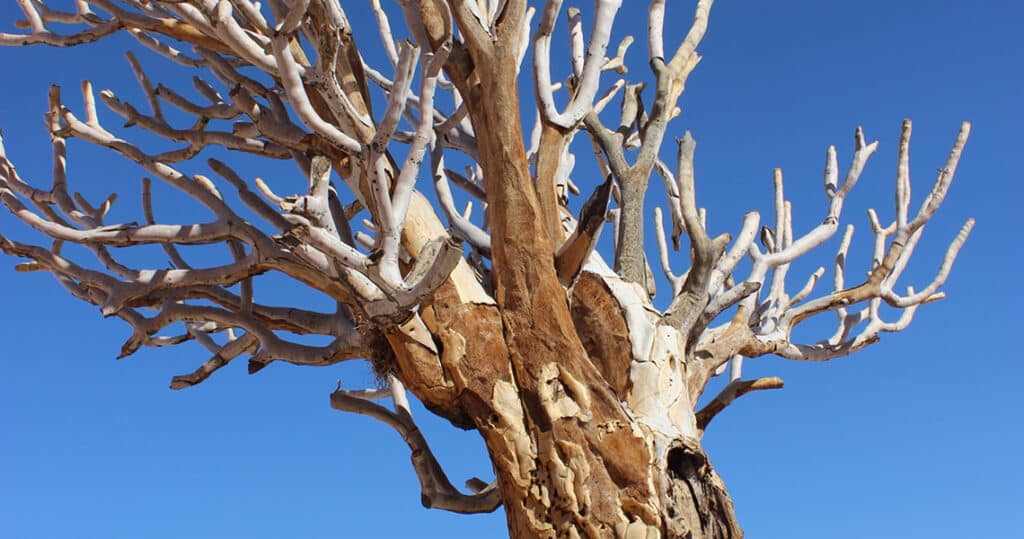 From Cape Town, head straight up towards the Namibian border post on the N7. The most common route is north from Springbok on
the N7, turning left at Steinkopf (49km) onto the R382 to Port Nolloth (94km). From Port Nolloth, head north for 84km to Alexander Bay. This is where the tarmac ends. From Alexander Bay, head back inland for 90km to the park gate and on to Sendelingsdrift.